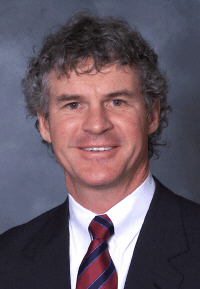 Mr. McLaughlin has more than 34 years’ experience as a trial lawyer, trying over 100 jury trials to verdict in State and Federal Courts across the country.  He focuses his practice on representing victims of defective medical devices and consumer products. Mr. McLaughlin also is a national expert on Wright Medical Profemur hip fracture cases, and electric blanket and heating pad fires.  Mr. McLaughlin is former chair of the American Association for Justice (AAJ) Product Liability Section, and a member of the Colorado Trial Lawyers Association Board of Directors.  He is a frequent author and speaker on continuing legal education issues related to the trial of product liability cases.

Born in Pittsburgh, Pennsylvania, Mr. McLaughlin considers Wheeling, West Virginia to be his home town.   After graduating from the University of Notre Dame in 1976, and the University of Denver College of Law in 1979, he returned to his home town of Wheeling to practice law and have a positive impact on his community.  George spent the first 21 years of his legal career as a partner in the Wheeling law firm of Bachmann, Hess, Bachmann and Garden, while  also serving as the Municipal Judge of the City of Wheeling for 10 years.  It was in West Virginia that Mr. McLaughlin honed his skills as a trail lawyer, trying a variety of civil cases from automobile and truck crash cases, to complex medical malpractice and product liability injury and death cases.  George developed particular expertise in representing families with children who had suffered catastrophic brain injuries as a result of Group B Streptococcal (GBS) bacterial infections acquired at birth.  Having published and lectured on that subject, George represented the families of children across the country that were affected by this devastating infection.

Coming off a trial in 1995 that resulted in a multi-million dollar settlement for a little boy affected by GBS, George was asked to look at a potential case involving the death of a woman in a house fire suspected to have been caused by an electric blanket.  Little did he know that case would send him on an 18 year journey that continues to this day, representing victims of fires caused by electric blankets and heating pads.

After several cases against Sunbeam, the largest manufacturer of electric blankets sold in the United States, George persuaded the ABC News program 20/20 to produce an exposé of this product and the fires that electric blankets have caused.  The 20/20 exposé aired on April 16, 1999.  To date George has represented nearly 100 victims of electric blanket and heating pad fires and injuries more than 35 States.  Tragically, more than a dozen of those cases involved a death or horrific burn injuries.  Electric blanket fires continue to occur.

Mr. McLaughlin is a frequent lecture at state and national trial lawyer continuing legal education seminars.  He has also published several articles in attorney journals, including TRIAL, the Journal of the American Association for Justice.  However, it is not only attorneys who have in interest in Mr. McLaughlin’s professional work.  He has been invited to speak at state and national seminars of fire investigators and insurance industry professionals, including the International Association of Arson Investigators, and the National Association of Subrogation Professionals.  He has also published articles in Fire Findings, a journal that is a reference resource for fire investigation professionals.

Mr. McLaughlin has been admitted by examination and remains in good standing to the State Bars of Colorado, Ohio, and West Virginia.  He is also a member in his own right to fifteen Federal District Court Bars, four Federal Circuit Courts of Appeals, and the United States Supreme Court.  He is a member of the American Association of Justice (AAJ), where he is past Chairman of the Product Liability Section, founder of the Electric Blanket Fire Litigation Group, and co-chair of the Wright Medical Hip Litigation Group.  He is also a member of the AAJ Political Action Committee, Membership Committee, and Finance Committee.  In Colorado, Mr. McLaughlin has serves as a member of the Colorado Trial Lawyers Association Board of Directors, as well as co-chair of its Product Liability Committee.

Mr. McLaughlin’s interests are not limited to the law.  During his years in West Virginia he served in a wide variety of community service positions.  For several years he was a board member, and then president, of The Friends of Wheeling, one of the oldest historic preservation advocacy organizations in the United States.  He also served as an appointed member of the Wheeling Center Market Commission, the board of directors of the local division of Salvation Army, and the West Virginia Literacy Council.  At the request of the Governor of West Virginia in 1994, Mr. McLaughlin headed the successful effort to bring to Wheeling one day of the week-long West Virginia K-Mart Classic Tour of West Virginia, profession bicycle race.   The following year he served as the state-wide liaison with the Governor’s office for all six host cities for the race.  Mr. McLaughlin also lead West Virginia’s successful bid to the USA Cycling Federation to be one of the host venues for the 1996 U.S. Olympic Cycling Trials.

Mr. McLaughlin’s prior experience in West Virginia, and his continuing passion for professional cycling, lead to the Governor of Colorado to appoint him in 2010 to a committee to bring professional cycling to Colorado.  The result was the 2011 inaugural year of the U.S. Pro Cycling Challenge. Now in its third year, the US Pro Challenge [unofficially called by its Tour de France level participants as the “Tour of Colorado”] has in just three years become the largest and most watch professional cycling race in the United States, with over one million spectators.